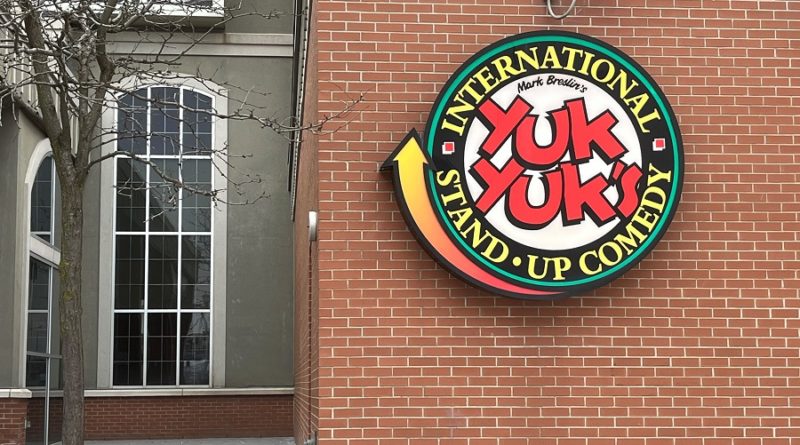 Photo: Yuk Yuk’s has been operating out of the Western Fair District’s Grandstand Building since December 2011

YUK YUK’S LONDON has had its last laugh at the Western Fair District, as founder and CEO of the Toronto-based chain Mark Breslin says that the comedy club will be closing at the end of the month.

But never fear, stand-up fans — he also says that they have a replacement venue, so the curtain won’t close on Yuk Yuk’s for long.

Breslin told the CBC that their Western Fair landlords want to repurpose the space “to reflect more of a casino reality rather than an entertainment value reality,” and that the comedy club has lined up a new home.

“It’s been a blast, folks!” the club said on their Facebook page. “We’ve had so much fun over the last ten years, literally, providing a comedy club experience for London. We have worked with amazing comedians that have taken the stage at the London club, to bring a smile and laughs to our customers, especially in the last two years, when we could open the club and we all needed a laugh.”

Yuk Yuk’s has been operating out of the Western Fair District’s Grandstand Building since December 2011 after the previous location, run by a different franchisee, closed at the corner of Wellington and York streets.

And while that all feels a bit mournful from the club’s perspective, it’s not exactly unusual for the journeyman club. Yuk Yuk’s in London has relocated thrice already. And it could’ve gone worse: four other Yuk Yuk’s across the country were forced to close as a result of the pandemic. “This is not the weirdest thing that could happen,” Breslin told the CBC.

Comedy fans looking for one last show at the old Western Fair location have just one more weekend to check it out, with four more shows scheduled (two this coming Friday, two this coming Saturday), headlined by comedian Ben Bankas. The club has yet to release any details about where it will be located when it returns.

“We hope London will welcome a new Yuk Yuk’s Club,” the club says, “in a new location, so the laughs just keep on coming.”