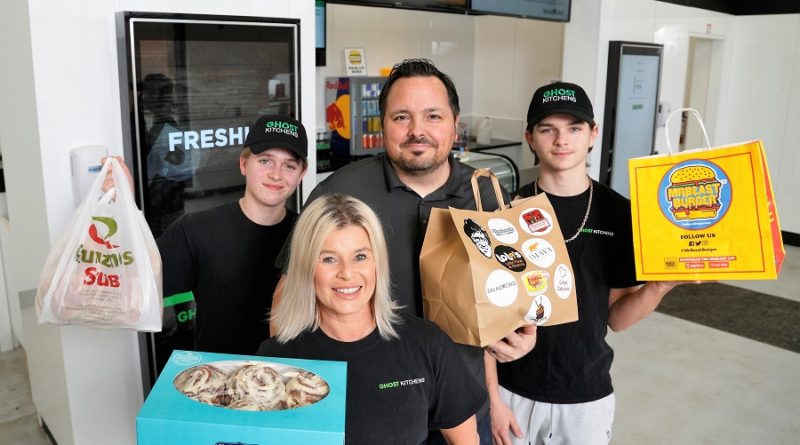 It’s like a mall food court — without the mall. Inside Ghost Kitchen Brands, the London restaurant that offers food from more than 20 familiar brands

WHEN YOU OPEN up your food delivery app of choice, more and more of what you see these days is a fairy tale. What you’ll often run across is a wide array of brands — some you recognize, some you don’t — giving the impression that just about every fast-food spot, burger joint, taco restaurant, coffee shop, snack-stand and local restaurant is standing by, ready to deliver from their kitchen to your door.

In reality, however, these virtual food courts are increasingly fulfilled by only a few kitchens supplying multiple different brands.

You’ve probably heard the term ‘ghost kitchen’ used in this context — a brand that has no storefront and is sold out the back door of an existing kitchen, often on the delivery apps. Ghost Kitchen Brands, which recently opened a unit in the revitalized London Mall at Wonderland Road and Oxford Street West, has taken this idea to the extreme, ­centralizing production not for one or two different recognizable names, but 25 different brands, from Quizno’s and Cinnabon to the Cheesecake Factory and Smoke’s Poutine.

“When I looked last weekend at about three in the morning, there were 25 brands listed on UberEats for me to order from — and nine of them were mine,” says Troy Martin, owner of the London franchise and director of brands for GKB.

“We can seem like this faceless store. But we’re a family from Oakridge. My wife works in there. My two boys work in there” ―Troy Martin

Founded in Toronto by George Kottas in 2017, Ghost Kitchens Brands now has over 50 locations in Canada and the U.S. It recently struck a deal with Walmart that would place kiosks and kitchens in at least 60 of its American stores, 15 of its Canadian ones and more across Central and South America.

“We can seem like this faceless store,” continues Martin. “But we’re a family from Oakridge. My wife works in there. My two boys work in there.”

And this is how it works: any given GKB location has deals in place with dozens of established and recognizable brands to produce and sell their products (either via take-out or delivery), all out of the same large, modular kitchen. Want a Cinnabon to go with your Jamba Juice? No problem. A Slush Puppie to go with your Taco Del Mar? Slush on. 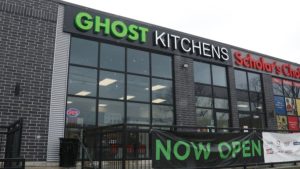 And they aren’t knock-offs, either — in most cases, the food is made of the same ingredients, from the same suppliers, using the same equipment and are ostensibly cooked to the same quality standards.

For proponents of the model, it’s the future of fast food.

“What I pitch to [prospective franchisees] as the way of the future is multi-branded ordering,” says Martin. “I’ve always wondered why in a town, outside of the mall, there isn’t a food court — a place you go with your family and say, ‘You go here, you go there, I’ll go here and we’ll meet at this table and eat.’”

GKB, he says, simply tries to create that experience outside of the shopping mall.

The North American fast-food industry is at an obvious crossroads. Tastes are changing. The desperate help-wanted signs that started popping up during the pandemic are proof enough that the existing model — inexpensive food made by workers being paid subsistence wages — isn’t working, at least not the way it used to. What’s a brand to do?

One answer is to detach the brand from the franchise, and allow other companies (like GKB, in this case) to make and sell their products, often to app-based customers who might be none the wiser, while they collect a fee. (Martin explains that the deals differ — some of their brands are brought in through licensing deals, while others are considered mini-franchises within the GKB location.)

“New brands,” Martin notes, “especially in the U.S., still have that dream of going to every state in the union and building a traditional store. But it could take them years. Whereas we can really fast-track that for them.” 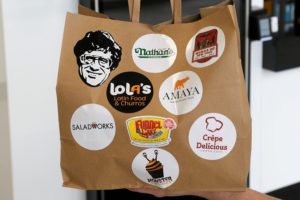 GKB also benefits from the rise of ‘virtual brands’ — brands that skipped the physical stage altogether and have always contracted out production to other kitchens.

“We have MrBeast Burger in our stores, and right now it’s our number-one brand,” Martin explains. “His YouTube channel has like 90 million subscribers. He’s been huge and he created his own virtual brand. And now MrBeast Burger is served by probably 1,500 restaurants across North America.”

When they rolled out the MrBeast Burger brand in London, they didn’t even engage with the delivery apps. “I knew it would create enough of a buzz in town that we didn’t put it out for delivery,” Martin says. “We did in-store only, and it quickly became our number-one brand.”

No doubt that the reach of apps like UberEats and SkipTheDishes have made concepts like GKB more viable — for one thing, they do conceal the novel (and to some, confusing) nature of the business. But when Martin thinks about the future of this business, it doesn’t live and die by what UberEats is doing — what he believes GKB is reimagining and recreating is the classic food court experience, outside of the mall.

“In-store, I call it your neighbourhood food court. Online, it’s your virtual food court,” he says. “I still think that the appeal of a multi-branded offering will be successful, regardless of third-party delivery.”