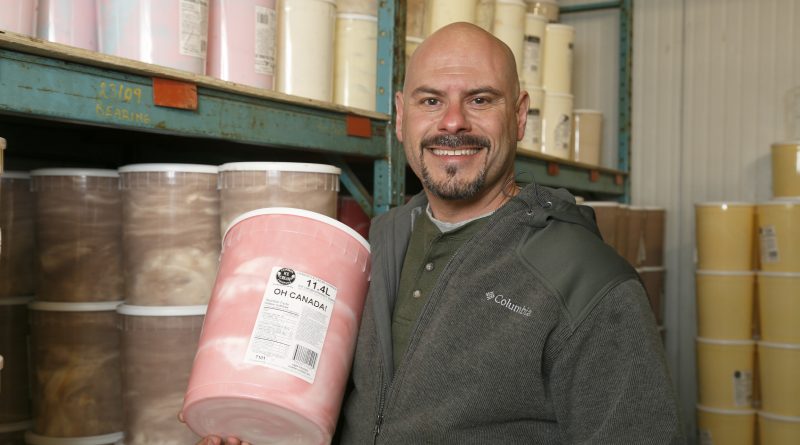 Succeeding in a crowded and competitive industry, New Wave Ice Cream
gears up to expand its distribution market

CYRIL CHALYKOF MIGHT spend a lot of time at his desk and on the phone, a necessity to stay on top of his growing business, but at the end of the day, he’s happiest grabbing some tools and tinkering with the machinery. Which is not surprising, given his first foray into the ice cream business was successful because of his mechanical skills.

As a teenager, Chalykof spotted a dozen ice-cream carts in fairly rough shape sitting in a farmer’s field. “I approached the owner and asked him if I could buy them, but not pay him until the end of the season,” he recalls. “If I couldn’t pay him, at least they would be refurbished when he got them back.”

Chalykof fixed up the carts himself, using all of his savings—$2,000—to get them on the road and stocked with ice cream and frozen treats. He hired students to pedal his fleet of ‘Mr. Frostee’ carts around the city—and he did make more than enough money that first year to pay for the carts.

“I put together a catalogue, with items from a number of different sources, and offered store owners the convenience of a one-stop-shop. We could deliver all of those supplies when we delivered their ice cream” —Cyril Chalykof

By the time he was 18 years old, Chalykof had established enough credit that he was able to purchase truckloads of product directly from the U.S., which represented a huge cost savings. He established New Wave Ice Cream as a wholesale distributor, and expanded his franchise to six different cities from Windsor through to North York. “I put myself through university with those bikes,” he says.

Chalykof graduated from Western in 1997 with a degree in mechanical engineering, and by 1999 he had stopped running the bikes. But he had not given up on the ice cream business. He went on to expand New Wave’s client base to include ice cream parlours, restaurants and convenience stores across Southwestern Ontario and north along the Lake Huron shores. He quickly realized that in small communities and beach towns, where the closest cash-and-carry store for supplies might be 45 minutes away, customers needed not just ice cream and frozen confections, but also related products like cones and toppings, sundae cups and napkins.

“I put together a catalogue, with items from a number of different sources, and offered store owners the convenience of a one-stop-shop,” says Chalykof. “We could deliver all of those supplies when we delivered their ice cream.”
One of the places he sourced tubs of premium ice cream was the London Ice Cream Company (londonicecream.ca). “I became friends with the owner, Alan Sargant, and in 2006 I bought the company from him,” says Chalykof. In the pink brick building on Base Line Road, where Sargant (pronounced ‘sergeant’) established  the London Ice Cream Company shop and where the ice cream is still produced, the flavour line-up includes a ‘Sargant Pepper’ in his honour.

Longtime employee Karen Minielly , who started in the mix room almost 20 years ago and is now the plant manager, presides over the production and formulates recipes for new taste combinations. This year, in honour of Canada’s 150th birthday, the company has introduced a few fitting flavours, including ‘Oh Canada’, ‘Bruce Trail Mix’ and ‘Canadian Rockies’.  Production has amped up significantly since Minielly first started working at London Ice Cream Company, especially during the summer, when about 25 seasonal employees are added to the mix and the plant runs from 7 a.m. to midnight.

New Wave has always maintained its own warehousing and distribution facility, and that side of the business has grown significantly in recent years. Now that New Wave is wholesaling both premium and price-focused bulk ice cream products, and is offering an expanded catalogue of novelties and accessory items, the company has made inroads into new markets, most significantly in the GTA.  Since participating in the annual Restaurants Canada trade show, which is held at the end of February each year, Chalykof has been contacted by potential purchasers from Halifax to Victoria, and is gearing up for future distribution across Canada.

In order to ensure demand won’t outstrip capacity at New Wave, Chalykof recently moved the distribution business into a 35,000-square-foot facility he purchased on White Oak Road. And when you walk into his office in the new building, one of the first things you notice is a large Rocky poster behind his desk. Chalykof says he’s a huge fan of film’s working-class character because “he’s the guy who never gave up,” and he’s quick to quote his favourite line from the movie: “It ain’t about how hard you hit. It’s about how hard you can get hit and keep moving forward.”

And right now, Chalykof is feeling like he is bracing for the hits—the cost of ingredients are up, the cost of hydro has increased significantly and he’s making major investments at a time when industry competition is fierce. Nonetheless, he figures at some point production will outgrow the Base Line Road shop, and he’ll have to add a production line at the White Oak Road facility.

For now, however, his main concern is to keep what he has running smoothly and efficiently. So, when the work day draws to a close, he continues to do what he enjoys most: he heads out to the plant floor and starts to tinker.