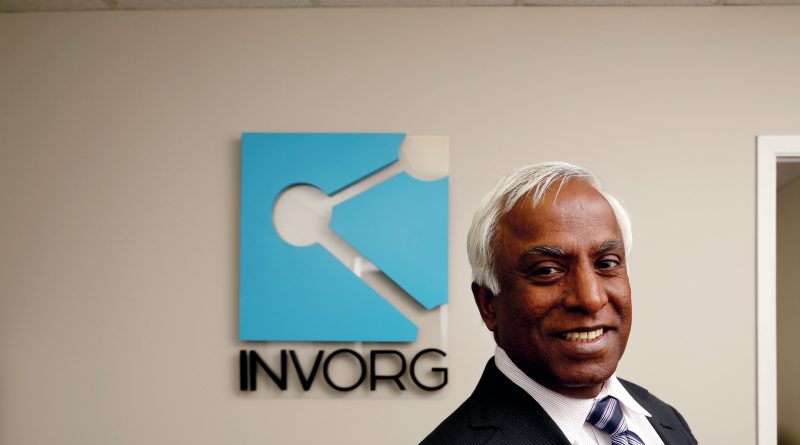 With a backstory of kindness from strangers, a growing technology
advice and services firm thrives on helping others get a chance

If the saying has become a cliché, the concept certainly has not. After implementing it on a smaller scale while working for others, Edward has expanded his approach in the last three years and built an entire company using the philosophy. The result is a thriving office of innovators and a long list of charities and not-for-profit organizations grateful for their expertise.

He created INVORG in 2014 after four years as chief technology officer with the City of London. He hired one person in the first few months and operated that way for much of the first year. Today, the company employs 18 and moved recently to new office space on Waterloo Street to accommodate continued growth.

Edward’s back story is the stuff of Hollywood. He left his war-torn homeland of Sri Lanka in 1983 and lived in Montreal until 1986. That’s when his wife, Parimala, was accepted to study at Western.

“We are an affordable approach for many organizations that can’t afford to hire larger, more expensive consultants” —Joseph Edward

“So I came to London by myself to find an apartment for us,” he recalls. A serendipitous series of encounters and referrals from various Catholic organizations in town led him to St. Peter’s Seminary, where a priest introduced him to Michael Brandon, who hired him to work at his software company.

That chance encounter—and the kindness of a series of strangers who kept referring him to others who could help him find a home and a job—changed his personal and professional life. More than three decades years later, it continues to animate his business choices.

He worked as technical director for the Roman Catholic Diocese of London for 18 years before joining the City of London. At city hall, he pitched an internship program to help recent arrivals to the city gain experience, working with technology in his department. He can still list all six names and their current employers.

Perhaps more importantly, the experience of helping those half dozen people prompted him to create INVORG—which stands for Innovation Organization.

“We are an innovation management company,” says general manager John Plante, who joined the company this summer. “We help organizations innovate and manage their systems from end to end.”

Many INVORG employees are newcomers to Canada or London. Most of the organizations the company works with are not-for-profit or community-based groups.

“We are an affordable approach for many organizations that can’t afford to hire larger, more expensive consultants,” Edward, 60, says. “We look at their entire system and find unique solutions for them. We might start with something they can afford to do, but build it in a way that’s entirely ­scalable so they can add to it and keep using the system for years to come.”

Recently, for example, INVORG helped Conservatory Canada rework its entire database. And it is working closely with the Cross Cultural Learner Centre.

Looking beyond Southwestern Ontario, Edward is ­determined to establish partnerships with First Nations organizations to bring training to communities where a simple internet connection could deliver jobs and prosperity.

“The possibilities are endless,” he says. “We are going to establish a project to help in that area.”

The focus may be new, but the principle behind the plan has been consistent since that day in 1986 when London opened its doors and welcomed him.