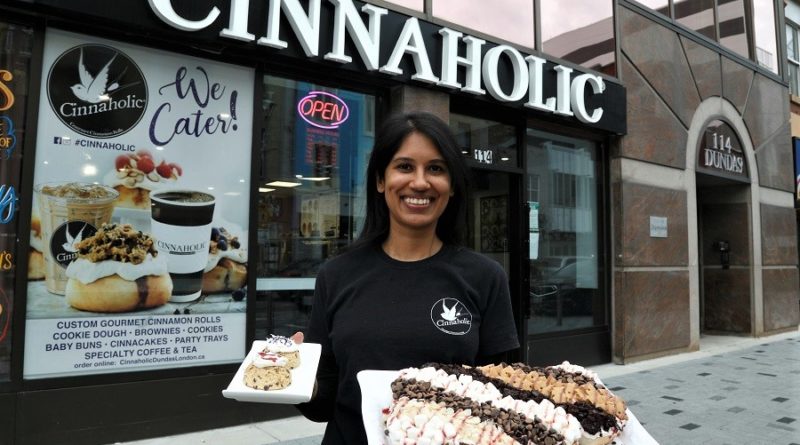 BITE INTO ONE of Cinnaholic’s ­cinnamon buns, and it’s likely you won’t notice anything different: there’s the warm, buttery cinnamon flavour, creamy frosting and any number of customizable toppings to create an ideal treat.

What you might not notice? The whole thing is vegan.

To read this story in magazine format click here

“A lot of people don’t even know that it’s vegan,” says London franchisee, Varsha Bhola, whose Cinnaholic unit opened on Dundas Street this past March. “We don’t necessarily put it out there all the time — we let people know [that it’s vegan], but it’s not our foremost advertising; we believe that the product speaks for itself.”

Widespread expansion has been the name of the game for Cinnaholic, a California-based bakery founded in 2009 that began franchising in 2014 after an appearance on the pitch show Shark Tank.

In 2019, during a year that saw ­substantial expansion for the brand, they moved into the Canadian market with store in Ottawa (there are now about 60 franchise units in the U.S. and Canada). The business was also able to ride the explosion of the delivery app industry to a 137 per cent year-over-year growth in 2021 — proof, if nothing else, that comfort-food options were a massive hit with consumers during the pandemic.

It’s Bhola’s first crack at business ownership. She says the opportunity seemed like a perfect fit when she came across the concept at a franchise show in Toronto a couple of years ago. 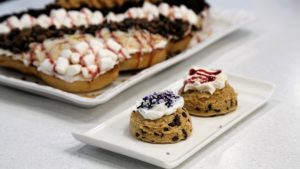 “Cinnaholic stood out to me the most,” she recalls. “First of all, I was looking for something that I could really get excited about. This was my first venture into business. I wanted something with a more established routine. And I really love the whole vegan aspect.”

When she initially started investigating the business, Bhola says there weren’t any Canadian operations open. “The first time I tried it, it was three-day-old cinnamon buns that they had flown in from California. I thought if they tasted this good three days later after a plane ride, imagine how good they would be fresh out of the oven.”

Of course, no introduction to the world of entrepreneurship is without hurdles, and the fates would provide Bhola with several. It was late-March 2020 by the time she got the keys to her unit at 114 Dundas Street, just east of Talbot, with the downtown core emptied of its usual business crowd and the rest of the world slowing to a crawl.

Then, building permits fell through the cracks at city hall. “Everything was super delayed for my opening,” she says.

By the time she was ready to open again in March 2021, Ontario was once again in lockdown. The solution was leaning hard into the delivery business.

“The third-party deliveries have really been our saviour,” says Bhola.

And now, with supply chains being interrupted, new challenges have emerged. While ingredients have been relatively easy to source, packaging has been problematic. 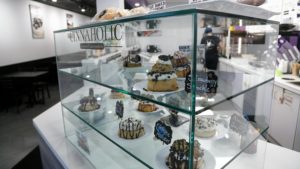 “We normally do black utensils; I’ve had to switch to white because I just can’t find black utensils anywhere. And some of our containers are a little bit scarce — those types of things,” she says.

“I had a problem with chocolate chips for awhile — there was about a six-week period in which I thought I was not going to get it and I think we ran out for two days, but it all eventually came back in. At this point, I just stock up as much as the space can hold.”

Given the trials of launching during the pandemic, Bhola is more than satisfied with how the business is currently positioned. And with the ­franchisor’s commitment to continued expansion in Canada, she is keeping an eye on possible additional units down the road.

“Cinnaholic is one of those places — it’s cinnamon roll comfort food, so sales went up across the board during the pandemic,” she says. “We saw a lot of excitement over it. It’s been going very well.”